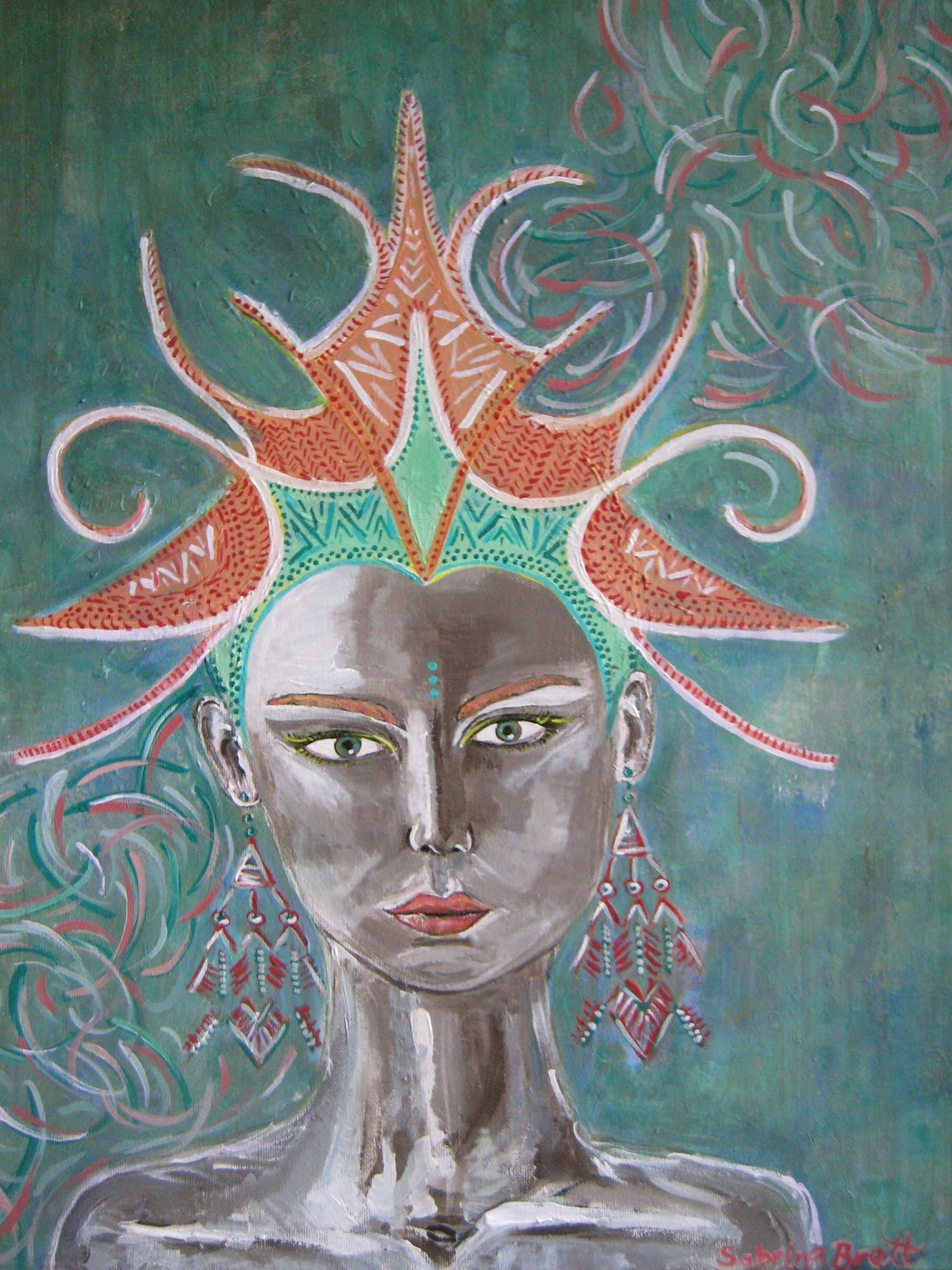 Medium: Acrylic on Canvas.
Size: 18″ x 24″
In designing the headdress of my subject, I sought to evoke a place of worship, a place that garners respect. The still, symmetrical and angular design suggests the structure of a temple, or altar. My color pallet of mint green and coral is inspired by the colors currently saturating the Spring 2012 runways. I painted “Bow to the Artist, Honor the Intersection” to venerate the profound and groundbreaking artists with whom we share this world with, both past and present. The stimulus: Sundance Film Festival 2012.
The films and documentaries presented at this year’s Festival were incredible, both poignant and progressive, as well as, sensitive and genuine. Sundance is like a master cleanse, detoxifying and exfoliating away all the mass media junk that permeates our pores and makes us sullen about the future of the media and the film industry. After participating in this “detox program,” I feel refreshed and hopeful that art is alive and well, and woman can be represented honestly in film (great female roles & performances in: Your Sister’s Sister, For a Good Time, Call…, Hello, I Must Be Going, Bachelorette, Save the Date, Four Suns). Of the 19 films I saw, my top 10 are as follows:
Art is a complex discipline, involving and intertwining multiple themes, issues and subjects. Artists who understand, investigate and call our attention to social, environmental and political issues through their medium are my heroes. Art, when wielded as a fearless instrument of honesty, protest and dissent, is a powerful transcending force. Unfortunately, this intersection is often marred with censorship and personal threats, causing many artists to continue living/working in exile, or self-censor.
As an undergrad, I seized every opportunity to bridge my two majors (Music and Political Science), by researching this intersection, as it related to literary, performing and visual art:
§    “They may crush the flowers, but they can’t stop the Spring” – Alexander Dubcek. Literary Figures (Ivan Klima, Milan Kundera, etc…) in Czechoslovakia– An examination of the Soviet period of normalization following the Prague Spring, highlighting the hardships and struggles undergone by the Czech and Slovak writers and intellectuals under the communist era.
§    Music Censorship in the Soviet Union: Composer Dmitri Shostakovich (b. 1906) – Lady Macbeth of the Mtzensk District, an affront to Socialist Realism.
§    Unofficial Youth Culture in Iran: Subversive Lipstick – Denied formal avenues for political opposition, subcultural youth dissent is being articulated through cultural identity: namely music (hip hop, rock), fashion, and social relations with those of the opposite sex.
§    The Intersection of Music, Politics and Youth in Iran – Today, western popular music is banned in Iran. The relationship between popular music and politics in this country is deeply rooted in conflicting perceptions of national identity, Iran’s sentiment towards the West, and the nature and function of musical lyricism.
§    Trobairitz: the Medieval Female Voice – Troubadour music and poetry serve as a significant window into medieval France, providing narrative insight with regards to social class dynamics, male-female relationships and courtly love.
§    Channeling Black Feminist Sexual Expression through Hip Hop – By exploring the obstacles in the Black feminist movement, we can draw parallels to obstacles in contemporary black female music.

§    In Conversation with “Monster” – There are many discourses surrounding Kanye West’s single “Monster” (My Beautiful Dark Twisted Fantasy, 2011). The analysis circulating the blogosphere is highly polarized and mainly centers on gender and racial elements of the video. The various examinations put forth, seek to ascertain who or what the “monster” is, determine whether or not the imagery is problematic, and overall decipher the meaning of the video and song.